Virtual Reality has a long history. As early as in 1838, Sir Charles Wheatstone was able to construct a machine that let him look at an image and make it seem three-dimensional. In the following decades, many inventors stuck to the idea of immersing oneself in different worlds. And video games seem like the perfect place to apply and develop that technology further. A look back at the history of VR reveals that the technology lived through many success stories but also failures.

One of the first VR machines was the Sensorama, invented by cinematographer Morton Heilig. It was able to stimulate multiple senses with 3D video, audio, vibrations, smell and even wind. Heilig thought of it as the “cinema of the future”.

In 1969, VR technology made huge improvements thanks to Ivan Sutherland. He invented the first head-mounted display (HMD). Although it could only show virtual wire-frame shapes, it was able to track the movement of the user. However, there was one big downside, earning it the name “The Sword of Damocles”: It was so heavy that it had to be mounted at the ceiling.

Jaron Lanier and Thomas Zimmerman at VPL Research, Inc were the first ones to sell VR goggles and control gloves. During this time, VR found use cases in the military, in flight simulators or at NASA training simulations.

1993 – Sega attempts their own VR headset

In 1993, VR was already used as a gimmick for games in Arcades. The gaming company Sega then announced that they would develop their own headset for arcade games and the Mega Drive console. Shortly later, the project was quietly cancelled. Sega’s official reason for this decision was that the experience was so realistic and immersive that players could hurt themselves using it. However, it was more likely that the VR helmet gave people motion sickness. 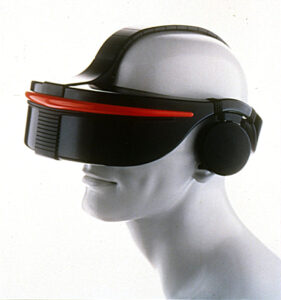 1995 – Nintendo fails with the Virtual Boy

Nintendo, Sega’s largest competitor at the time, actually released their own VR console: The Virtual Boy. Unfortunately, it turned out to be one of the biggest failures in the company’s history. Common complaints from gamers revolved around the lack of games and it being uncomfortable to use. It also only used a red and black color palette. Nintendo also included health warnings for liability reasons, which
contributed to the commercial failure of the virtual boy.

VR was never dead but it took more than 15 years until mainstream interest returned with the Oculus Rift. The Kickstarter campaign for the VR headset reached more than $2.4 million and over 9.500 people supported the project. In 2014, Facebook (now Meta) bought the Oculus company for $2 billion. In the following years, other big companies like Sony, Google, Samsung and Valve developed their own VR Headsets.

Today, there are multiple VR headsets on the market that can be used to play video games. Headsets are also combined with controllers that allow the player to use their hands in the virtual space. Three popular VR headsets are:

Valve Index (2019): Valve rallies thousands of PC games on their platform Steam. The Valve Index can benefit from this connectivity.

Meta Quest 2 (2022): Meta got rid of the Name Oculus Rift completely and now sells the headset under the new name Meta Quest 2. The headset can also be used without connecting it to a PC, which is a large advantage facing the consumer market.

PlayStation VR 2 (2023): Sony stands out by targeting console gamers with PlayStation VR. The second edition is rumored to be released in 2023. 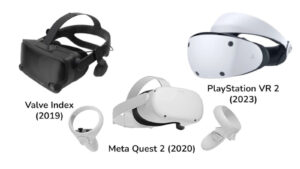 With the recently rising investment happening in the VR market, experts also expect sales to rise. Forecasts from 2019 expect VR sales in gaming to continue to rise steadily over the next few years. 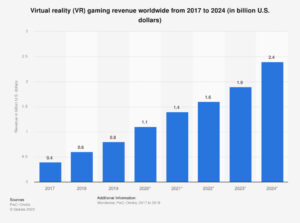 So what’s played in VR? What works, what does not?

VR as a gimmick

With the VR hardware for games finally releasing from 2014 and onwards, many well-known game developers started to incorporate VR as a fun gimmick to already established games such as Fallout 4, showing off their technology in a broad environment. This naturally led to players of traditional games having their first contact with VR hardware. But as time tells, this did not really stick.

The unique new nature of using VR did not fit previously established games that were played using traditional monitors and controllers. Moving characters while standing or sitting still with a VR headset on was a major issue. Instead, popular games with rising VR usage turned out to be the ones that most natively and intuitively represent the actual VR player, who is not moving feet but rather sitting in a chair using hands and head.

It is thus that games like Microsoft Flight Simulator or Project Cars found their way into many VR goggles over the world. In these games, the player’s movement matches the in-game movements very closely. This contributes to a feeling of real immersion and protects users from motion sickness – an unpleasant experience caused due to a difference between actual and expected motion. There’s just something about simulation-like games that fits the natural VR experience. However, resourceful game developers have found other ways to make their VR games creatively intuitive. A great example is the popular Beat Saber, where players stand still in a fixed environment slashing at obstacles that come to them!

VR as a social platform

Kind of merging gaming and socializing in a way, VR has become a social trend too, where players can interact in virtual spaces built via game engines. In light of the growing voices talking about the concept of Metaverse, platforms like VRChat therefore grow ever more important. 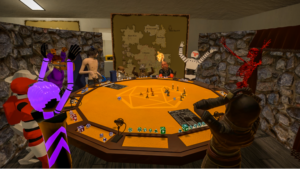 Users there create avatars to represent themselves and meet in dedicated virtual rooms that can be rented using real money. Just like you would for your party in real life! And with rising numbers of VR gear in common households, one can make the assumption that this is just the beginning… That is, if VR gaming can overcome the challenges still holding onto its market and the challenges ahead.

One of these challenges is a continuous shadow cast over the industry from the mid 2010s up until today: Low hardware sales lead to a small software sale potential. And where sale potential is small, investors naturally don’t put their money. It used to be more safely invested in traditional gaming, for example. The end of it: No software is produced for hardware already struggling, because Investors just don’t see the ROI to fuel the ambition of VR game developers. 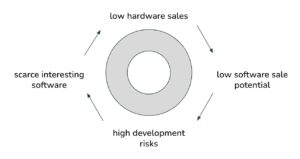 A vicious circle. At least that’s what many VR developers state during interviews. So then why should average consumers buy the expensive VR gear? For years, nobody could really truly answer this question (except for VR gaming marketeers of course). The answer could lie both in the undying efforts on the part of game developers wishing their dreams to come true. Or, perhaps more likely, in the heavy investment towards VR gaming which is going on right now, as previously mentioned. And one of these investors might actually go a little too far, potentially posing the next challenge up ahead.

Risk of a Meta monopoly

Still bearing with us? Then maybe you have also noticed something sticking out when we presented the popular state-of-the-art VR hardware packages earlier. Among the three, one might notice that the Oculus / Meta Quest 2 is fueled by a company not really famous for their reputation in the gaming market: Meta, formerly known as Facebook. The world-renowned Social Media platform operator has eagerly jumped on the VR gaming train in recent years and is continuing to secure its stand on it. 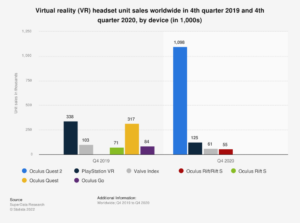 While it had already accumulated the lion’s share of VR hardware sales in 2020, almost 80% of VR headsets sold in 2021 were Oculus Quest 2 (now: Meta Quest) too. And this is just the development of 2020 and 2021. Up to this day, Meta further builds up on its investment in the gaming business by acquiring renowned growing amounts of game development studios such as Beat Games. Headlines of Meta mergers or acquisitions keep popping up on tech news sites increasingly frequently. Looking at Reality Labs (Meta’s VR business) actually operating losses at the same time, it is plain to see that Meta is employing a market strategy many would call aggressive. And so, after the American Federal Trade Commission had already filed a lawsuit against Facebook for the creation of a monopoly not long ago, Meta might once again find it in the spotlight of monopoly discussion. Only directed at their VR business this time. If this escalates in Meta’s favor, the VR gaming market could find itself in a tricky situation, where a giant company controls platforms and development alike.

Clear as day is one thing: VR technology and especially VR gaming has had and still has its struggles. After VPL Research debuted the iconic and exemplary design of their VR headset in 1985 and Sega launched their first gaming applications with a similar design, the hardware design has not changed much: It’s still a headset using goggles. It is still used stationary today, no movement of feet. Hand controllers are
still mainly used with the only innovations in finger precision. So, evidently, the most obvious changes happened everywhere else: Game engines have become much more complex, the 3D space was conquered and computing power of hardware started to soar with ever increasing resolutions and picture refresh-rates. Game developers have earned their standing as respected artists who create sophisticated
on-screen experiences. Gaming, in general, has become a wide-spread social phenomenon as well as a well accepted part of the media landscape. All these developments paved the way to challenge the limits of traditional on-screen games by bringing gaming to VR. The ever more respected game developers are finally fiddling more with what can be done in VR, immersively. What used to be more of a dream stemming from niche techies has thus become a mainstream inevitability. And it certainly is this very mainstream that fuels VR gaming development. Investors obviously see potential now and are just getting started to help take VR gaming to the next level. But in order to do it right and really let development soar, the gaming market as a whole will need to strike a balance between mainstream-direction and
independent creativity.

Is that a unique dystopia or simply part of a global trend?