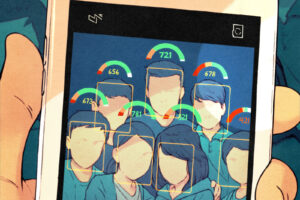 The science fiction series „Black Mirror“ aired on Netflix deals with a dystopian near-future. The first episode of Season 3, „The Fall,“ shows a world where every interaction with another person is evaluated. Scores on social media determine everything, from flight reservations to hospital treatment. This is a hypothetical dystopian scenario. However, this scenario is becoming a reality in China. In China, some citizens cannot get flights or use the slow Internet due to low SCS.

Maybe one of the first things people might think is that this would never happen around here, in established democracies or countries of the western Global North in general.

What is China’s SCS?

The SCS was officially announced in 2014 and began to expand nationwide. According to the outline of the plan for establishing an SCS published in 2014, the SCS is an important component of the socialist market economy and social governance system. This system has an important meaning in preventing economic risks by improving the credit environment of the market. It also aims to reinforce the perception that „broadly shape a thick atmosphere in the entire society that keeping trust is glorious and breaking trust is disgraceful, and ensure that sincerity and trustworthiness become conscious norms of action among all the people.“

This makes it easier for people and businesses to make informed business decisions. A high social credit score can also be an indicator of trust in the business context. 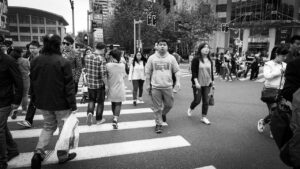 The China SCS rates individuals based on the aggregation and analysis of data. In some trials, this has involved a single numerical score (usually between 1 and 1000, like a FICO score), or a letter grade (usually from A-D).

In the case of a company, ratings from suppliers and customers and paying taxes affect a company’s credit score. A high SCS score brings benefits, but a low score can result in punishment or sanctions for individuals or companies.

The criteria by which an SCS is measured vary from city to city. In the Chinese city of Rongcheng, 1,000 points are provided first to all residents. Citizens living in this area are deducted points for bad behavior such as traffic violations. On the other hand, they can gain points for good behavior such as community service and donation. The SCS score may prevent students from attending certain universities or schools if their parents have a poor social credit rating. For example, in 2018 a student was denied entry to University due to their father’s presence on a debtor blacklist.

The following figure is an example of the deduction and additional points of the SCS, and the benefits and sanctions that can be obtained from it. 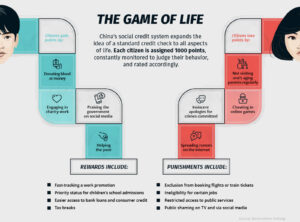 Actually, the idea of an SCS isn’t exclusively Chinese, also NOT the use and abuse of data for analysis of human behaviors and actions. However, if the Chinese system does come together, it would still be something very unique. It’s both unique and part of a global trend.

And although there is still no proposal for such an ambitious unified system in any western democracy, there are already some similar structures and cultures of social media use that are already in place that are more similar to the SCS than we might think.

The first one of these instances are the credit score systems:

Banks and financial institutions already use CSS to evaluate not only financial but also social data, to measure the creditworthiness and trustworthiness of an individual. So these institutions aren’t only invested in people’s financial situation, but also make judgments about their trustworthiness from other personal information, from the place you live in, what kind of house and neighborhood you live in, if you have neighbors with poor credit scores, etc. Now there is also a rise in private financial companies that are building algorithms that can predict your trustworthiness and creditworthiness just from your social media and email activity, and information. 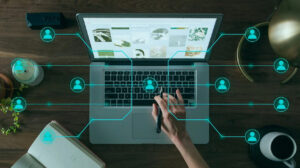 Another similar structure is metrics, tracking, and self-quantification movements:

Nowadays, many aspects of human behavior and habits are being measured quantitatively. We voluntarily and involuntarily track all kinds of aspects of our everyday lives, through wearables, mobile apps, and even social media. We can track how much we eat, walk, how we’re feeling, how we sleep, how much money we spend, and so on… This data of course is being collected by countless companies to customize their products and targeted content to us and in the end, extract as much money they can from us.

But similarly to the Chinese scoring system, companies are incorporating rewards and incentives towards specific behaviors that are tracked by these technologies.

So, we see that this very personal information is even beginning to shape essential services like life and health insurance, where some behaviors are rewarded and others disincentivized, and it has become normalized to just make our tracking data available for every company and everyone to see.

Third, we have a rating culture:

Rating culture already encourages us to rate and evaluate other individuals and services as well. These review and rating mechanisms have become the digital ‘word of mouth’, and created a new kind of currency in the form of reputation.

Of course, we still don’t have life or death consequences for being rated in social media, but this reputation currency already has a great impact, for example on which voices on the internet get uplifted and amplified, and which voices still remain unheard. 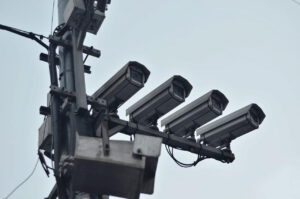 Lastly, we have surveillance infrastructures in Western democracies:

Surveillance infrastructures and technologies have increased in both technical capacities and public prominence, not only in China but everywhere. For the sake of security, governments tend to view personal data as intelligence data and put the privacy aspect as a second priority. When talking about surveillance cameras and facial recognition, even if China has way more than any other country in the world, when you look at other types of ranking and data, like most surveilled cities or the most cameras per capita, you also find countries like the UK, India, the US, among others.

Is there any hope in this kind of grim landscape? Could the progress of potential social credit systems be hindered in the near future?

One of the most prominent kinds of beacons of hope is of course the General Data Protection Regulation (GDPR). This regulation aims to harmonize data privacy laws across Europe, restructure the way companies approach data privacy and empower citizens regarding their data privacy. Even if enforcement of the GDPR remains difficult and time consuming, many firms have already been forced to make it easier for individuals to have their data deleted or retrieved, and companies also have to make sure that people’s data are not being collected and shared around without their consent.

However, data is still being collected for commercial & surveillance purposes and we probably don’t know the scope to which our data privacy has been breached or not. And it’s hard to say if the GDPR will be enough to stop the forces of state and corporate surveillance, but for sure it’s a very important step and a very powerful stance in favor of data privacy.

Is SCS a unique dystopia or simply part of a global trend?

China’s SCS is very unique in regards to how comprehensive and integrated it is to almost all aspects of life. At first sight it seems more like a breach of human rights and a tool of state control, than anything else, especially with the way the media have portrayed it, but also the reality of it as well.

However, it also should be a warning sign and a reminder that we have tons of instances in our societies, that not only compare to the ones of the SCS, but are also breaching our privacy rights. This system could show us that we’re already heading in that direction and how far rating surveillance data privacy breaches can go.

While Virtual Reality Technology is getting more popular, it's still facing challenges in gaming. Let’s take a peek at VR gaming history and its challenges.